The Robotics Team at The School at Marygrove

For a school with a curriculum that focuses on design thinking, a competitive robotics program is a natural pairing. Throughout the last year, Marygrove students were able to join the school’s Robotics Team. The team built a robot at U-M’s Michigan Engineering Zone in downtown Detroit and eventually competed in a FIRST robotics competition. Unfortunately, the long afterschool commute and competition fees made it difficult for more than a handful of students to be consistently active on the team.

“The travel time alone was a deterrent for many of our students. They would sometimes not get back to the school until 7 p.m.,” said Dr. Stephanie Moore, Detroit P-20 Child and Family Support Services Coordinator.

This year, a generous gift from the KLA Foundation will make it possible for more students to join and compete on the team. The gift will cover competition 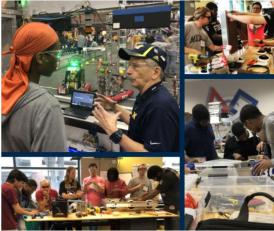 fees, equipment and parts for the robots, as well as the outfitting of a permanent, custom-designed robotics lab in the basement of the school.

“Many of our students don’t know about [the robotics team] yet. With the lab, they’ll be able to see it. Team members will be able to show their robots to peers, whereas they couldn’t before,” Moore said. “Once others see it and understand what it is, they’ll be excited to join.”

So far this school year, the five members of the robotics team have convened virtually with their two coaches, Donald Watts, TSM’s Dean of Culture, and Stephen Maiseloff, Attendance Agent. They meet Mondays, Tuesdays, and Thursdays after school. Despite currently being unable to meet in person, the team hopes to compete in another FIRST competition as soon as it is safe to do so.