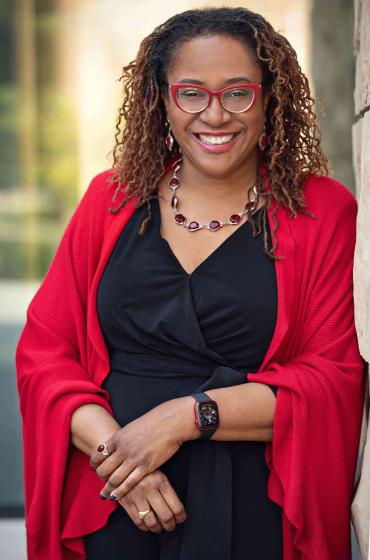 Ebony Elizabeth Thomas is Associate Professor in the Joint Program in English and Education at the University of Michigan’s School of Education. Previously, she was Associate Professor in the Literacy, Culture, and International Education Division at Penn GSE. A former Detroit Public Schools teacher and National Academy of Education/Spencer Foundation Postdoctoral Fellow, she serves as co-editor of Research in the Teaching of English. Her most recent book is The Dark Fantastic: Race and the Imagination from Harry Potter to the Hunger Games (NYU Press, 2019), which received the 2020 World Fantasy Award, among other honors.

Her expertise on race and representation in children’s and young adult literature has been sought after nationally and internationally. She has been interviewed by MSNBC, the BBC, the New York Times, the Philadelphia Inquirer, and the Chicago Tribune, to name a few. She is a former reviewer for Kirkus’ children’s book section, and has written book reviews for the Los Angeles Times. She is a past National Book Award for Young People's Literature judge, and is a current member of the United States Board on Books for Young People.

In addition to her work on books for young readers, she has published widely on race, discourse, and interaction in classrooms and digital environments. In conjunction with the National Writing Project, Amy Stornaiuolo (Penn GSE), Elyse Eidman-Aadahl (NWP), and Sarah Levine (Stanford), she is a co-principal investigator on a major James S. McDonnell Foundation Teachers as Learners grant, the Digital Discourse Project (DDP), a longitudinal collaborative inquiry into how partnering teacher consultants studied their own discourse practices with data and platforms as they facilitated online discussions during and after the COVID-19 era. She is also conducting empirical, digital, and archival research for her next monograph, The Shadow Book: Reading Slavery, Fugitivity, and Liberation in Children's Books and Media, which will focus on how traumatic historical events such as slavery in the teaching of literature are introduced through children's picturebooks, popular media, and the social Web.

"The Dark Fantastic: Race and the Imagination in Youth Literature, Media, and Culture."

"Race, storying, and restorying: What can we learn from Black fans?"

Thomas, E.E. & Stornaiuolo, A. (2019). Race, storying, and restorying: What can we learn from Black fans? Journal of Transformative Works and Cultures, 9.

"Restorying the self: Bending toward textual justice."

“We always talk about race!”: Navigating race talk dilemmas in the teaching of literature.