As dean, Cecil Miskel fostered relationships with the business and philanthropy sectors, which resulted in the school's first endowed chair, among many other strides forward. 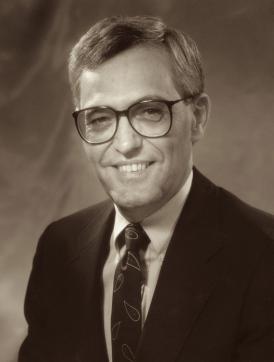 On July 3, 1988, Cecil Miskel was appointed dean of the School of Education, and assumed office on October 1. Miskel began revitalizing and further stabilizing the recently streamlined institution. Although the shadow of the review still lingered, the school began formulating a new mission statement: “The School of Education is a professional school with strong ties to the academic disciplines and is committed to: preparing educational leaders including professional practitioners who are teachers, administrators, researchers, and professors; conducting excellent programs in basic and applied educational research; and focusing on schools and schooling from pre-elementary through postsecondary.”

Reorganization consolidated the school into two program areas: Educational Studies, and Higher and Adult Continuing Education. The Educational Studies program was created in 1990 by combining what had become the program in Curriculum, Teaching, and Psychological Studies with the Educational Foundations, Policy, and Administration program. Activities in Speech and Language Pathology were dissipated to other areas. In 1994, Higher and Adult Continuing Education resumed the name of an earlier designation, Center for the Study of Higher and Postsecondary Education. The two program areas concentrated the school’s focus on pre-kindergarten through grade 12 education, and higher and postsecondary education.

Innovative programs were developed to give nontraditional students an alternative route to teacher preparation. The Master of Arts with Certification program recruited students from diverse backgrounds who already held academic subject degrees. The program provided an intensive one-year course of study resulting in certification. A similar program was aimed at returning Peace Corps volunteers, who received extensive teaching experience in the Detroit Public Schools while earning a master’s degree and certification.

Heightened awareness of education in the aftermath of the Nation at Risk report gave rise to new partnerships and developmental opportunities. The Michigan Partnership for New Education enlisted the support of business interests in the state to create and test new models of schooling and educator preparation. Professional development schools were tested as working models at Carpenter Elementary School in Ann Arbor and Edmonson Middle School in Willow Run. The Business Roundtable fostered cooperation with corporations concerned with education and issued an agenda for educational reform in Michigan called Education Excellence: Michigan’s Bottom Line. Private philanthropy provided the school with its first endowed chair, the Jean and Charles R. Walgreen Jr. Professorship in Reading and Literacy, and gave the school the Prechter Laboratory for Interactive Technology.

Many of the losses exacted during the review and its aftermath were gradually restored. The faculty was augmented by a newly recruited corps of talented young research faculty and a number of established senior scholars. In 1990, for the first time in the university’s history, each school and college held its own commencement ceremony, with the SOE’s taking place in Hill Auditorium. The moratorium on PhDs, imposed following the review, was lifted in 1992, reinvigorating research and the doctoral program in Educational Studies. Gone, however, was one of the school’s historic functions. School accreditation activity, dating back to 1871, was taken over by the state in 1992, ending a commitment by the university that had lasted for over 120 years.

In 1996-97, the School of Education celebrated its 75th year as a professional school, looking back on an impressive legacy forged through a steadfast commitment to training educators and continuous adaptation to societal needs. At this point in its history, the school counted over 43,000 living alumni, with graduates residing in every state in the nation and over 600 alumni living in 72 countries abroad. The School of Education had indeed proven that there was a philosophy and a science of education and had validated the decision made in 1879 to create the Chair of the Science and the Art of Teaching.