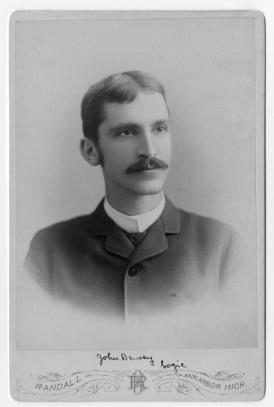 The great American educator John Dewey taught philosophy at the University between 1884 and 1894. As a young faculty member, Dewey served on the committees that inspected high schools for accreditation and became increasingly interested in the problems and methods of education.

Dewey’s work with accreditation developed his interest in the issues existing between high schools and colleges. In 1886 he was among a group of teachers from the university and the Ann Arbor and Ypsilanti high schools that founded the Schoolmaster’s Club. The club brought together high school teachers and college professors for discussion of common problems, and it became one of the most influential educational organizations within the state. As an organization, it lasted for more than 80 years and effectively promoted the interrelationship between secondary and college education through annual conferences and periodic publications.

At the first meeting of the Schoolmaster’s Club on May 1, 1886, Dewey presented what is arguably the first true paper on education, “Psychology in High Schools from the Standpoint of the College.” Dewey’s interest in education remained a major focus of his philosophical career, long after he left Michigan in 1894. Dewey published School and Society in 1899 and became the intellectual leader of the progressive education reform movement through his rejection of authoritarian teaching methods and emphasis on child-centered education.

Source: The Science and the Art of Teaching : The 75th year of the University of Michigan School of Education by Brian A. Williams