Charged with restructuring and reshaping the School of Education, Dean Carl F. Berger paved the way for its future. 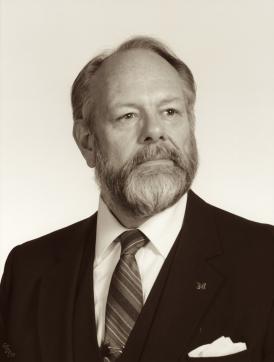 Following the widely publicized review hearings of the School of Education, the provost decided to launch an internal search for the school’s next dean. Carl F. Berger, Associate Dean for Research under Dean Joan Stark, accepted the deanship and was approved by the regents as the school’s sixth dean on September 15, 1983. Berger would lead the school through the post-review transition period with the condition that a national search for a successor would occur as soon as the transition was complete and it was feasible to attract strong candidates.

The regents endorsed the 40 percent reduction over five years in the school’s budget at their September meeting, but softened some of the other recommendations. The undergraduate degree program was retained, but a moratorium on PhD degrees was imposed with the exception of the Center for the Study of Higher Education and the joint programs in English and Education and Psychology and Education. In lieu of the PhD, the EdD would become the primary doctoral degree in the other programs. The school services unit was retained but was to become self-supporting, and physical education became an independent unit, emerging as the Division of Kinesiology.

A transition team, appointed by Berger and the university’s central administration, began negotiating the plan for reducing and reorganizing the School of Education. After months of private meetings and negotiation with central administration, the transition team delivered its plan to reduce the school’s budget by 40 percent to the regents in March 1984.

The plan’s premise was that the core mission of the School of Education “unequivocally must be the improvement of elementary and secondary education through significant, high quality research, teaching, and service.” The plan called for reducing the academic staff from 75 full-time equivalents to 45 and consolidating and reducing support staff by 40 percent. Admissions standards were closely monitored, and the curriculum and programs streamlined. Doctoral degree specializations were reduced from 54 to five, and master’s specializations from 63 to 13. The 13 program areas were reduced to four: Curriculum and Teaching; Educational Foundations, Policy, and Administration; Speech and Language Pathology; and Higher and Adult Continuing Education.

Educational technology was selected as the overall theme for the school, and three research centers were established to coordinate and stimulate research: the Center for Research and Learning in Schools, a new initiative; the Bureau of School Improvement Standards, an expansion of the school accreditation functions; and the Center for the Study of Higher and Postsecondary Education, largely a continuation of the existing program.

Berger successfully guided the school through the difficult period of downsizing. For the most part, the recommendations of the review had been followed and a “slimmer and trimmer” school emerged following the transition period. Research and reform had been kept alive, and despite major cutbacks, some new hiring had occurred amidst the reduction. Among the major accomplishments was the creation of a Microcomputer Education Center and several leading initiatives in campus-wide computer utilization. A major grant had been received to establish the National Center for Research to Improve Postsecondary Teaching and Learning, under the direction of Joan Stark, and the school had become a member of the reform-minded Holmes Group, a consortium of education deans from research universities around the country committed to reforming teacher education programs. The school had been stabilized and it was now possible to conduct a national search.