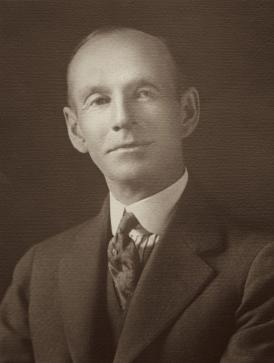 Allen S. Whitney was appointed to the Chair of the Science and the Art of Teaching in 1907. He presided over a period of dramatic expansion, culminating in the creation of the School of Education in 1921. Ultimately serving as the school’s first dean, Whitney had been principal of the Pewabic Mines school in the Upper Peninsula before enrolling in the University of Michigan in 1879, the same year the chair in education was established. After graduation, he was superintendent of schools at Mount Clemens and later at Saginaw before his appointment at the University as inspector of high schools in 1899.

Upon being appointed chair in 1907, the decision was made to rename the Department of Science and Art of Teaching to the Department of Education to signal a break with the past and a realization that education was rapidly becoming an integral part of the University. Gone were the days of the one-man department as new professors were gradually added.

That same year, Whitney petitioned the Regents for permission to visit several leading universities to study their teacher-training programs. His findings were prepared in a report submitted to the LS&A faculty in 1908. The report confirmed that while Michigan had taken the lead in establishing a permanent chair, it had fallen behind its peer universities in developing education. Ohio State, Illinois, Iowa, and Minnesota all had schools or colleges of education and were well equipped to provide practice teaching and observation; the University of Chicago, influenced by Dewey, was operating an exemplary model school. Whitney’s report contained nine recommendations designed to strengthen the University of Michigan’s Department of Education. The first five recommendations, aimed at consolidating the various teacher’s courses and giving the Department of Education greater control over teacher certification, were rebuffed by the LS&A faculty. The final four points concerned practice teaching and recommended the use of the Ann Arbor Public Schools for observation facilities and the creation of a model school.

In 1911 a contract was signed with the Ann Arbor Board of Education to allow observation in the local high school and at the W.S. Perry Elementary School. The arrangement was not entirely satisfactory, and the department continued to press for a model school. Advocates argued that a demonstration school would make education comparable to the established professional schools of medicine and dentistry, which utilized hospitals and clinics for practical training.

While continuing to petition for a model school, the department also stressed the need for a larger staff and expanded course offerings. The faculty lobbied as well for improved classroom and administrative facilities over their basement space in Tappan Hall.

In 1919, the Michigan Legislature appropriated funds for a “model or demonstration high school,” and Whitney began to guide the plans for building and organizing University High School. As planning for the model high school was under way, the Regents deliberated on whether to elevate the Department of Education to a professional school. On May 27, 1921, the Regents passed a resolution establishing a School of Education effective July 1, 1921, with Whitney appointed acting dean and subsequently the first dean. Whitney’s vision, along with that of his predecessors, would shape what was soon to become the School of Education at the University of Michigan.

Source: The Science and the Art of Teaching : The 75th year of the University of Michigan School of Education by Brian A. Williams