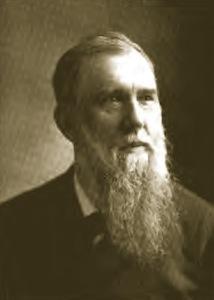 In February 1888, Burke Aaron Hinsdale became the second person to hold the Chair of the Science and the Art of Teaching. In addition to teaching and serving as a minister, Hinsdale had previously served as president of Hiram College and superintendent of schools in Cleveland, Ohio.

Hinsdale’s work was based primarily on his practical experience rather than theoretical philosophy. A scholar of wide-ranging interests, Hinsdale wrote on history and religion as well as education. In his book Studies in Education, he argued that the university as a research and teaching institute was not treating education as a science and asked the question, “Why should an institution that exists for the sake of investigating the arts and sciences leave its own particular art neglected and despised?...To practice the art while refusing to cultivate or teach the science of teaching, is little better than rank empiricism.”

Upon assuming the chair, Hinsdale added three new courses to the curriculum begun by his predecessor: history of educational thought, child study, and social phases of education. The last course included a discussion of the relation of education to vocation and crime.

Perhaps the most significant achievement of his tenure, however, was the certification of teachers in 1891. The state Legislature authorized the University to award a certificate as a legal qualification to teach in any of the state’s public schools. The teacher’s diploma begun in 1874 was still offered, but it lacked the legal clout of the new certificate. Although the Department of the Science and Art of Teaching—of which Hinsdale was the sole faculty member—attempted to establish standards for certification, individual departments retained control over the number of courses and credit hours required.

To assist in teacher placement, a Bureau of Appointments was established in 1898. Allen S. Whitney was hired to serve as the first full-time inspector of high schools—a formalization of the accreditation function—as well a junior professor. Whitney’s arrival doubled the fledgling education department instantly. Hinsdale died on November 29, 1900. By then, eight courses were being offered to aspiring teachers who accounted for 387 course elections in the education department.

Source: The Science and the Art of Teaching: The 75th year of the University of Michigan School of Education by Brian A. Williams